– Chinese Premier Li Keqiang will visit Germany, Belgium and the EU headquarters from May 31st.

– This could add momentum to the EUR/USD and USD/CNH and lead major breakouts.

– Check out the IG Client Sentiment to see how retail traders place their positions.

To receive reports from this analyst,sign up for Renee Mu’ distribution list.

Chinese Premier Li Keqiang is on his way to Europe for a three-day trip beginning on May 31st. According to China’s Foreign Affairs Ministry, Li will visit Germany and Belgium and attend multiple EU events at Brussels. Li’s visit comes at a time with the rise of anti-globalization. To promote free trade and investment with China’s major partners will be a main purpose of his trip.

One highlight will be Li’s meeting with German Chancellor Angela Merkel. Trade plays a key role in the economic tie between the two countries. On one hand, Germany has been China’s largest trade partner in EU for years; on the other hand, China has become the largest trade partner to Germany in the world in 2016, overtaking the U.S. The bilateral trade between the two countries hit $ 151.3 billion in 2016. In the first quarter of 2017, it rose 10.5% on an annualized basis to $ 37.0 billion.

Another top event worth to watch is the EU-China leaders’ meeting in Belgium. Chinese Premier Li will exchange views with European Council President Donald Tusk and European Commission President Jean-Claude Juncker, regarding EU-China relations and global issues of common concern. 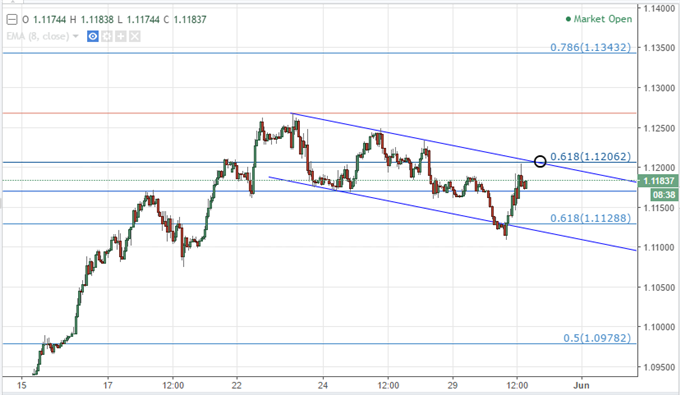 The EUR/USD has been in a downward trend after it touched 1.1268, the 6-month high, a week ago. Now it approaches the top of the channel once again, a level also close to a key resistance of 1.1206. If Chinese Premier Li’s reaches major agreements with German and EU leaders after meetings, it may add confidence to markets, increasing the odds of a EUR/USD breakout. Also, according to IG Client Sentiment, the Euro is expected to rally further against its U.S. counterpart. 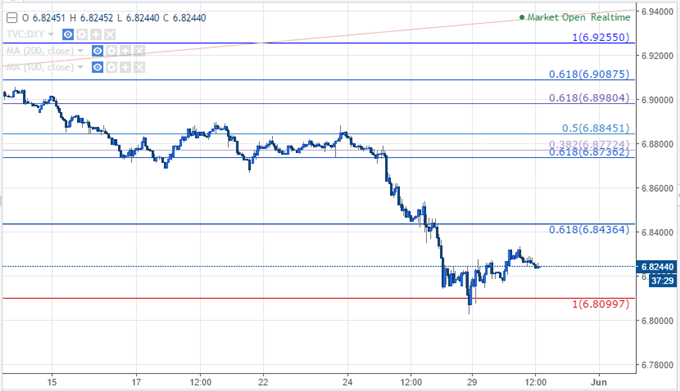 The offshore Chinese Yuan tested a key resistance (support for the USD/CNH) and touched 6.8031 on Monday, the strongest level since February 7th, following the introduction of a counter-cyclical factor in the Yuan fixing regime. This newly added component is designated to increase the weight of Chinese fundamentals in determining Yuan’s reference rate. After curbed the risk of major conflicts with its largest counterpart during the Trump-Xi meeting, China now moves to strengthen ties with its second-largest partner. Improving trade and investment conditions will help China to maintain economic growth while the country is conducting domestic reforms on various sectors. Thus, for China, major deals with German or EU could be considered as fundamental development and then be reflected in the Yuan rate under the new reference rate regime.

To receive reports from this analyst,sign up for Renee Mu’ distribution list.