– The offshore Yuan had the largest single-day gain since January 5th; watch the key levels next.

– Yuan’s overnight funding cost jumped in the offshore market, while the reference rate was slightly changed. 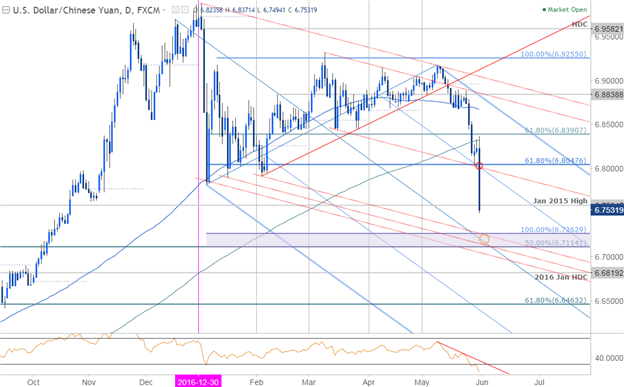 USDCNH broke a key support confluence today at 6.8048 where the 61.8% extension of the decline off the yearly high converges on a pair of operative slope lines. The break has fueled the largest single-day decline since January 5th with the move taking out the yearly at 6.7585. A critical support zone is seen lower at 6.7114-6.7263– a region defined by the 100% extension & the 50% retracement of the 2016 advance and converges on a pair of slope lines extending off the late-January & February lows- risk for a larger rebound off this zone. A break lower would target subsequent support objectives at the January high-day close at 6.6819 backed by the 61.8% retracement at 6.6463.

Initial resistance stands with the 2015 high at 6.7585 with broader bearish invalidation now lowered to the 6.8048 target (former key support). Note that momentum remains deep in oversold territory and keeps the focus lower for now. From a trading standpoint I would be looking to fade strength on a rally towards the 50-line targeting key support where the pair would be at risk for a near-term recovery.

Yuan’s recent rally is mostly driven by the tightened liquidity in the offshore market. The overnight borrowing cost of the Chinese currency in Hong Kong’s interbank market (HIBOR O/N) soared to 21.0793% on Wednesday. As seen in the following chart, when Yuan’s funding cost rose, the Yuan normally gained against its U.S. counterpart as it became more expensive for traders to short the currency. However, when the rate fell back to its normal range (below 4%), the USD/CNH rebounded as well. As a result, in terms of Yuan’s moves in the near future, HIBOR will be one key indicator. 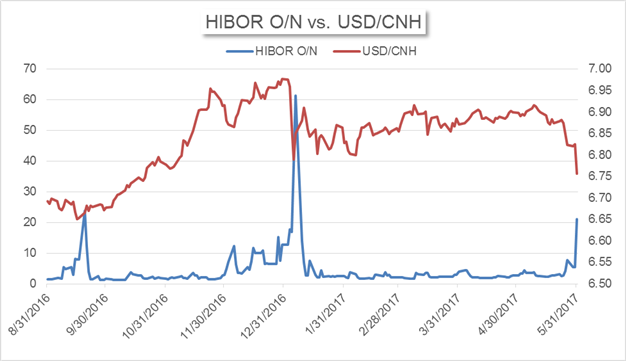 We can also see in the table that the current overnight borrowing rate has exceeded longer-term rates, which is unusual and may not be long-lasting.

The second key indicator is the PBOC’s reference rate. On Wednesday, the regulator strengthened the Yuan slightly, by 65 pips (or 0.1%) to 6.8633 as of 12:15 pm ET, which is over 1100 pips weaker than the offshore Yuan rate. Whether the regulator will recognize Yuan’s strength through the daily fix and how much it will be may impact the next trend of the Yuan rate. The CFETS, a division run by the PBOC, releases the reference rate at 9:15pm ET on trading days.

Yuan’s Value against A Basket

The Chinese currency has been losing to a basket of currencies that includes the U.S. Dollar. All of the three Yuan indexes have set record lows last Friday on a weekly basis. In specific, the primary gauge, CFETS Yuan Index, dropped -0.23% to 92.26 against the basket. China’s exchange rate target is to maintain the Yuan reasonably stable against a basket of currencies. Yuan’s gains against the U.S. Dollar will help to balance its losses against other currencies in the basket and stabilize its value to the basket. 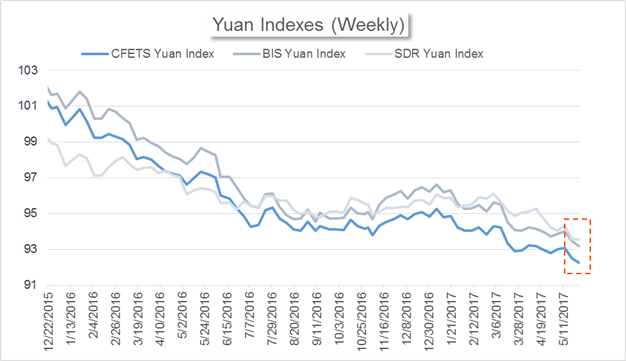 Last but not least, Chinese fundamentals will impact Yuan rates in the long term. China’s official manufacturing PMI print for May came out to be 51.2, better than a consensus forecast of 51.0 from Bloomberg. The following chart shows that the leading indicator has recovered from a contraction phase seen from mid 2015 to early 2016. The more important question is whether the improvement can be sustainable over the following months in 2017. Also, China will release Caixin manufacturing PMI read for May at 9:45pm ET today; the gauge measures the condition of smaller firms that are normally more sensitive to economic cycles. The Caixin print could give out more clues on the development of Chinese producers that have encountered major obstacles. 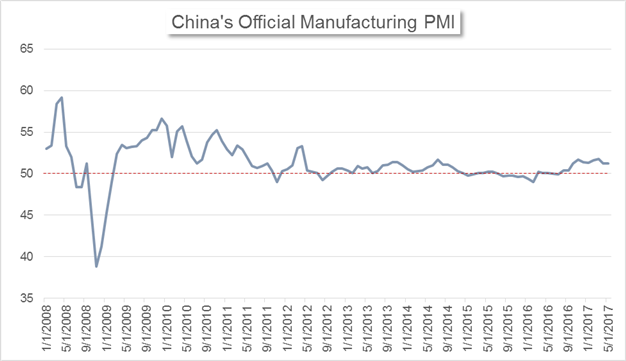 To receive reports from Renee Mu,sign up for her distribution list.