Dow Jones Industrial Average (DJIA) has recovered well from the losses stemming from May 17. With DJIA printing above 21,078 late last week, it alters the pattern we were following some. Previously, we were looking for a small dip in price to offer a buying opportunity towards new highs. As we see below, the door is now opened for a slightly larger dip back towards 20,440.

From an Elliott Wave perspective, we have the current wave higher labeled as wave (b). This Elliott Wave model allows for the current wave to continue higher up to 21,471, though it doesn’t have to. Therefore, between now and around 21,471, DJIA is at risk of finishing this shorter term uptrend in favor of a sell off back towards 20,440. 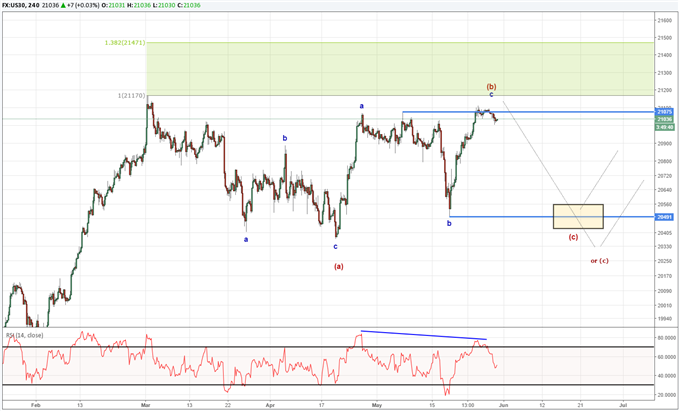 For those familiar with Elliott Wave, you can see by the wave labeling of (a)-(b)-(c) that we are in the midst of a corrective sequence. Though prices may eventually sell off towards 20,440, when the corrective sequence ends we are anticipating a new wave to new highs.

The sentiment picture for DJIA is aligned towards a near term sell off. As my colleague notes, Dow Jones may be flashing a sell signal by the simple analysis of live trader sentiment. Review and learn how to trade with sentiment with our IG client sentiment guide.

Interested in learning to trade with Elliott Wave? Get started with the beginner and advanced Elliott Wave guide.

Discuss this market with Jeremy in Monday’s US Opening Bell webinar.

USDJPY’s Elliott Wave model shows it is vulnerable to a 110.60 retest.

EUR/USD has been ripping lately. Read more on the EURUSD Elliott Wave picture.

Stocks lower but off worst levels at the close