This source is most authentic to know Sources of ancient Indian history.

The earliest inscriptions that have been read are those of Ashoka, whose language is “Prakrit”.

There is a clear mention of Ashoka’s name in the inscriptions obtained from Maski and Gurjara. King Ashoka is mentioned by the name “Priyadarshi”.

Some of Ashoka’s inscriptions are in Kharosthi script, and Kharosthi script was written from right to left. Maski and Gurjara are in Madhya Pradesh. Firstly, the mention of ‘Bharatvarsha’ is obtained from the Hathigumpha inscription of Kalinga King Kharavela.

The first evidence of the practice of Sati is obtained from the Eran inscription (Senapati Bhanu Gupta) of 510 AD.

The oldest record is considered to be the record obtained from Boghazkoi in Central Asia.

In this inscription there is mention of a treaty between the Hittite king Sappilulyuma and the Mitanni king Mativaja.

Coins should also be mentioned under Sources of ancient Indian history. The earliest coins are called Punched Coins or Punch Marked Coins. In the texts, they have also been called by the names Shatman, Purana, Dharan, Karshapan etc. Most of the punched coins (punchmarks) received so far are pieces of silver. 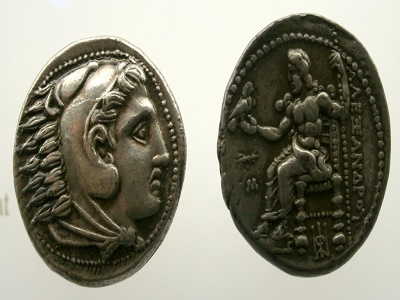 If we talk about writing inscriptions on coins, then the practice of writing inscriptions on coins was first started by the Yavana rulers. Kanishka was a follower of Buddhism, the proof of this goes to us only from the coins issued by Kanishka. You must have come to know from all these things that [Sources of ancient Indian history] how important is the role of currency in knowing ancient Indian history.

Mainly two types of literature are mentioned under literary sources.

Brahmin and post-Brahmin texts can be discussed under religious literature. If we talk about Brahmin texts, then Vedas, Upanishads, Ramayana, Mahabharata, Puranas, and Smriti texts come under it. And the compositions related to Buddhist literature and Jain literature are mentioned under the post-Brahman texts.

We will give detailed information about Brahmin and non-Brahmin texts and literature in the coming posts.

Arthashastra composed by Kautilya (other name: Chanakya) gives us detailed information about the Mauryan history and its administration. By the way, Gargi Samhita is an astrological book, but in this book India Mention is made of the Yavana invasion. Which helps us to a great extent in knowing our Indian history.

Historical and semi-historical texts and biographies have been mentioned under cosmic literature.

The most important of the historical works is Rajatarangini composed by the Kashmiri poet Kalhana.

‘Rajatarangini’ was composed during the reign of King Jai Singh (1127-1159 AD) of Kashmir. In which the history of Kashmir till 12th century is described in 8 waves. Rajatarangini is the first attempt to present historical events in Sanskrit language in a systematic manner.

“Most of the questions are asked from this topic in the exam, so read it thoroughly and 2-3 times”

1. Description of writers of Greece and Rome

Herodotus: Herodotus is called the father of history. In his book Historica, he has given a detailed description of Indo-Persia relations of 5th century BC.

Megasthenes: This was the ambassador of Seleucus Nicator, who came to the court of Chandragupta Maurya. Megasthenes has written about the society and culture of the Maurya era in his book ‘Indica’. The original book is now lost.

Dionysius: Dionysius was the ambassador of Ptolemy II Philadelphus, king of Egypt and came to the court of Ashoka.

Dimachus: He was the ambassador of the Syrian king Antiochus I, who came to the court of Bindusara.

Ptolemy: Ptolemy composed a book called ‘Geography’ around 150 AD around the second century.

Pliny: He composed a book named ‘Natural Historica’ around the first century.

He has given a detailed description of Indian animals, plants, minerals etc. in his book.

Following are the names of Chinese travelers whose details were particularly useful in the reconstruction of Indian history.

Faxian: Faxian came to India in the court of King Chandragupta Vikramaditya (375-415 AD) of the Gupta dynasty. It has described the society and culture of Madhya Desh in its details. In which the people of Madhya Desh have been described as ‘happy and prosperous’.

Sungyun (Song Yun): It came to India in 518 AD. It collected copies of Buddhist texts in its 3 years of travel.

Xuanzang: Xuanzang is also known as ‘Yuwanchwang’. It came to India around 629 AD at the time of Harshvardhan, who lived here for 16 years. The biography of Xuanzang was written by Hwili. Hwili was a friend of Xuanzang.

Alamsoodi: Alamsoodi has given a live depiction of the then Indian society in his book ‘Mururaj Zahab’.

Sulaiman (Sulaiman or Soleiman al-Tajir): Information about the Pratihara and Pala kings is obtained from the description of Sulaiman.

No comments to show.